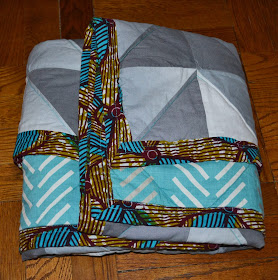 I mentioned this tutorial in my nursery inspiration and knew I would make it as soon as I saw it.  I purchased the fabric that Caroline suggested in her tutorial and made the front of the quilt.  I separated the squares into four different shades instead of three like she suggested in the tutorial.  I also decided I wanted my final quilt to be around 40" x 50" ish so I cut 64 squares knowing I'd only needed 63 of them in the end.  I finished up the front about a week before Cora was born. 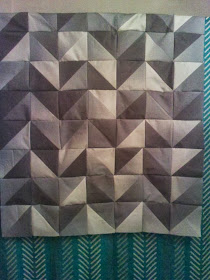 For backing fabric, I wanted color and pattern so I decided on this fabric from Spoonflower.  I procrastinated a couple months before I basted the quilt, but it was easier than I thought it would be.  I read through a bunch of different random sites for tips to baste.  Here is a pretty good resource that is pretty similar to what I did except a couple differences...  Instead of taping to a hard surface, I used a straight pin and pinned it to the carpet.  I also just used regular safety pins. 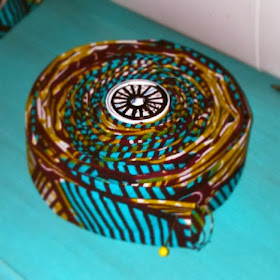 Using some of my African fabric, I followed this binding tutorial.  I cut my fabric strips about four inches wide, so that after all of the folding, they would be about one inch wide on the finished quilt.  I wasn't very precise with my cutting because I knew I could make binding consistent with the folding/ironing.  A day or two later I added on the binding.
Here is the final quilt: 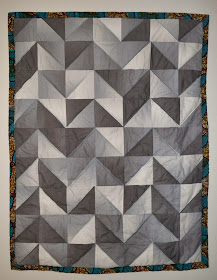 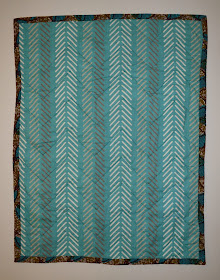 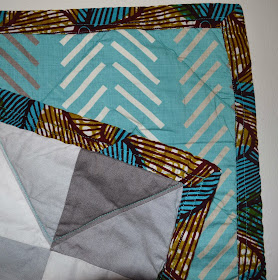 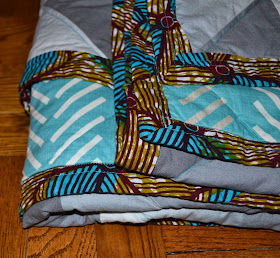 This project was surprisingly easier than I thought it would be.  The big hold up was just procrastination and thinking that it would be more difficult and time consuming than it actually was. That being said, I will probably never even attempt a full size quilt.  This was the perfect size quilt to work on without it being overwhelming.  And because everyone likes a picture of a cuddly baby... 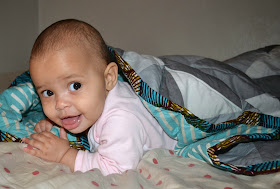 Thanks for taking the time to comment. Have a golden day!